“Did you say ‘saver staycation’??”

This has been a stressful couple of months: between preparing for high school essays and exams, Seoul Fashion Week, and preparing for my upcoming trip back to the U.S. (for vacation, of course), I got a little burned out . I just really wanted to take that staycation and decompress, but I wasn’t in the mood to plan some totally lux stay; I had so much work to do, and I just wanted some kind of cozy retreat, no matter the price point. So, a few weeks ago, I jumped at the opportunity to stay at the relatively new Hotel Maui DDM, which is located 15 minutes away from Dongdaemun Station on foot. Some of my blogger friends had stayed there before, so I figured I would try it out for myself. 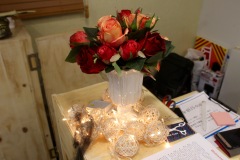 The hotel is promoted by the Korea Tourism Organization.

I had room 501, but because of the Koreans’ aversion to the number four–they equate it with bad luck and death–it was actually on the 6th floor (all of the 400-level rooms were on the 5th, which confused me for a second). I requested a double, knowing that I would be alone but also knowing that I wouldn’t want to squeeze myself into a twin bed for two nights.

The room itself is cozy and welcoming, complete with a flat-screen TV and a small refrigerator (which I used often). The bed was nice and firm, especially to Korean standards, so I had a good sleep on it. The surprise, though, came in the form of the bathroom: it was almost as big as the bedroom itself! Shampoo, conditioner, and shower gel are already there, so those were a few less toiletries I had to bring!

The hotel also has a rooftop, complete with a picnic table, umbrella and extra chairs; it was a little too cold to sit out there , but I could see it being used a lot during the warmer times of the year.

What I enjoyed most of my entire stay was the atmosphere and my interactions with the staff. Not only the owner, but also folks like Tammy and Zeno, made the stay very relaxing and welcoming. There tends to be some kind of party or function for the guests most weekends: I stayed during Halloween weekend, so naturally there was a Halloween party,

complete with masks, Halloween hats, and cobwebs…and, of course, tons of food. I found myself sitting with a pretty diverse crowd: some tourists from the Philippines, a gentleman from Shanghai, and a few Europeans (whose countries I didn’t catch) meandered to and from the area. The sense of community I felt here was a really nice change from the exclusivity that often comes with staying in luxury hotels.

The hotel is located near Dongmyo station, which is one stop away from Dongdaemun Station on the dark blue subway line (line 1). Almost anything you want in terms of food,  coffee, grocery shopping, and regular shopping is within a 10-minute walking radius. If you especially want to be in the middle of a less-touristy atmosphere, this is your area: tons of Korean restaurants are abound, and there is an outdoor market that’s open every weekend: there you can find everything from outerwear to food/produce to trot CDs. I briefly checked it out on my way back home but, considering I had some luggage with me, it was a tad too intense. 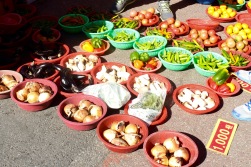 Many thanks to the super sweet folks at Hotel Maui DDM for having me! If you find yourself in Seoul and needing a place to stay, they are having a grand opening discount on all of their rooms until the end of the year (see below)! Be sure to check it out! 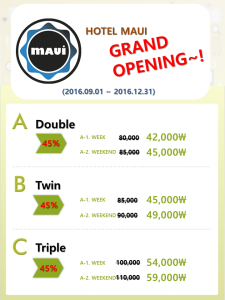 Note: Hotel Maui DDM was kind enough to sponsor a two-night complimentary stay in exchange for a blog post; however, the pictures and content are entirely my own.

A mother's musings on family, faith, and fun!

words & art from an optimist

Bringing a little piece of my world to you....

Recipes From The Kitchen of Chef Dennis Prescott